From 2008 to 2017, women in financial jobs saw the biggest pay disparities compared with their male colleagues, according to a study conducted by 24/7 Wall St. using data from the Bureau of Labor Statistics. 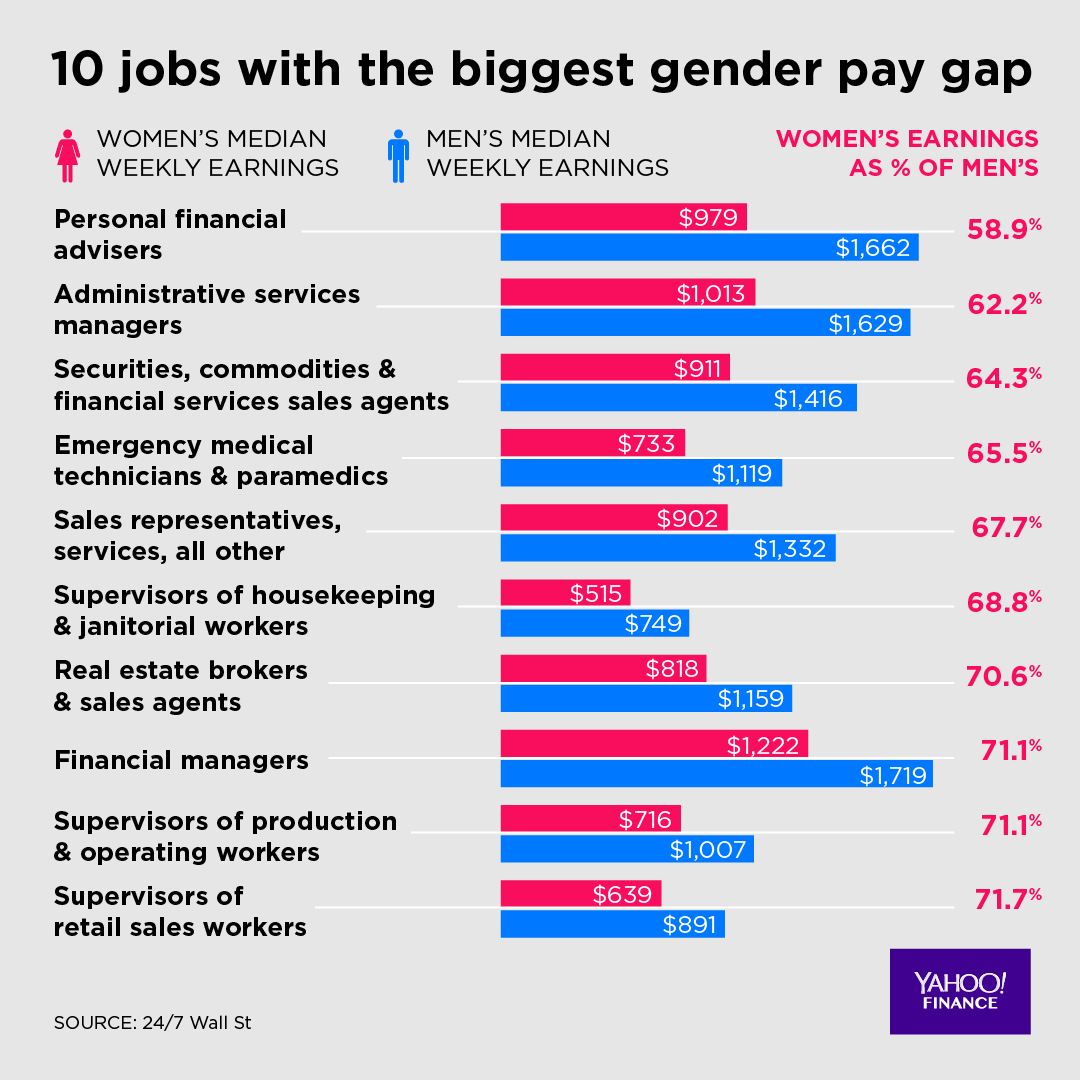 ‘That is going to penalize women’

Martha Gimbel, director of Economic Research at Indeed, attributed the lack of work-life balance in these occupations as a reason for the pay gap.

“Financial occupations may be more likely to penalize workers who need flexibility around working hours, which will disproportionately hurt women,” she told Yahoo Finance. “If the only way for a worker to succeed in an occupation is to work strict hours or never be off the clock, that is going to penalize women.”

“We need to think about not only how women are being penalized within occupations, but also how those penalties are affecting women’s willingness to enter high-paid occupations in the first place,” Gimbel said. “The pay gap is not just about these gaps within an occupation, but about whether or not women perceive that certain occupations are not just welcoming to them and their needs.”

‘Women are often penalized for negotiating their salary’

The Seattle Times reported that overall, women working full-time “still earn approximately 20% less than their male counterparts in the same positions,” according to the Bureau of Labor Statistics data. In 2017, the median weekly earnings for all women, age 16 and older, was $770 versus $941 for men in that age range, based on the data.

And although strides have been made to eliminate the pay gap, women are still struggling to catch up. So why has little been done to address this issue?

‘Pay transparency may make it easier’

Gimbel believes that for companies to tackle this problem, they need to think about how they’re structuring pay for their employees.

“For instance, pay transparency may make it easier for women to find out that they’re being underpaid and make the argument for a raise,” she said. “We’ve seen this happen quite dramatically in the UK with the release of the salaries at the BBC.”

“You look at countries like the U.K. where they have an equality act and force companies that have more than 250 employees to report the compensation between men and women,” she said. “There’s a lot of transparency there. … Perhaps these industries we’re looking at have less transparency when it comes to that wage compensation.”

“Women, especially those in key motherhood years, get less and less opportunity to hold manager positions,” she said. “And that directly correlates to the overall pay gap between men and women.”