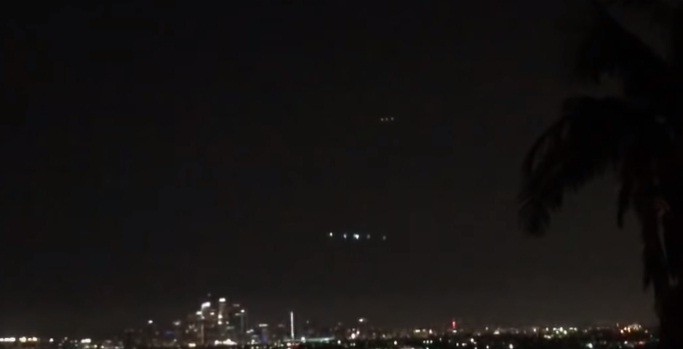 Conspiracy theory YouTube channel ‘Third Phase of Moon’ has uploaded a mind-blowing video recently which shows a huge flying object hovering in the skies of Downtown, Los Angeles. The video uploaded by the channel seem too authentic in nature, and spectators were seen pointing fingers at the bizarre object.

After the appearance of the giant flying object, a comparatively smaller object was seen moving towards the mothership. The video uploaded by Third Phase of Moon soon went viral, and conspiracy theorists started claiming that humans are not alone in the Universe. As per these theorists, advanced alien species from the outer space have been visiting earth for hundreds of thousands of years, and now they are gearing up for a direct confrontation.

‘Third Phase of Moon’ also claimed that multiple UFO sightings have occurred in Los Angeles recently, and revealed that they will upload more incredible footage in the coming days.

Most of the viewers who watched the video strongly argued that aliendisclosure is happening gradually. A section of others made it clear that the object in the skies might be the alleged US confidential aircraft TR-3B which runs on anti-gravity technology. As per these theorists, the US military is using TR-3B to spy other countries, and for secretive military operations. These theorists believe that Area 51 is where the US army conducts these secret experiments.

However, skeptics argued that this video released by ‘Third Phase of Moon’ is a hoax. As per these skeptics, it is the reflection of lights which has been misunderstood as UFOs by spectators.

“It’s pretty obvious and many things point to this, by how they are acting, the wobbling of the object…the way it wobbles when the tree blows, the angles seem off as from different perspectives as if it was only a few feet away,” commented Casey Brinegar, a YouTube user.

“It would have made the news if more people actually seen it. Thirdphaseofmoon is the only channel that witnessed this event in a city of over 3.9+ million people. I have to call bullshxx on this because YouTube would have been flooded with footage if this actually happened,” commented Imminent, another YouTuber.