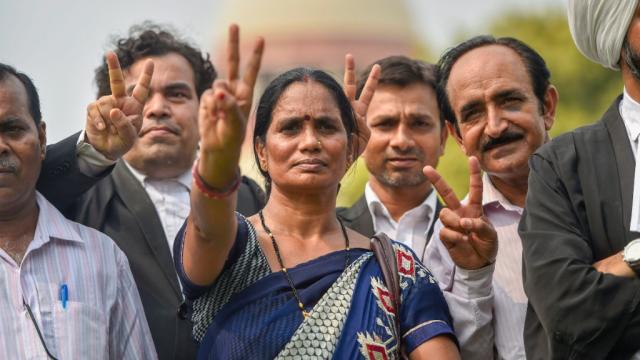 The Supreme Court on Monday, 9 July upheld the death sentence awarded to the convicts in the Nirbhaya gang rape and murder case. Three of the four adult convicts had filed review petitions seeking reduction of the death sentence to life imprisonment.

Nirbhaya’s mother Asha Devi said that the convicts in the rape and murder case of her daughter were not juveniles. “It is unfortunate that they committed such crime. This decision reaffirms our trust in the court that we will definitely get justice.”

Punishment a Lesson to Those Who Attempt Such Crimes, Says Congress

Congress spokesperson Randeep Surjewala tweeted that the punishment to the convicts in the Nirbhaya rape case was a lesson to all those who attempt such horrid crimes. “We stand by Nirbhaya’s parents, as always, in this quest for justice,” he said. He hoped the government will now follow up to act decisively on issues of women’s safety.

BJP leader Meenakshi Lekhi today said that the SC’s judgment in the Nirbhaya rape and murder case has restored people’s faith in the judiciary. “We, as a society, need to send a very strong message to the culprits and accused in the rape cases,” she told ANI.

The Supreme Court today dismissed the review petitions filed by three convicts in the Nirbhaya gang rape and murder case, upholding the death sentence awarded to all of them for the gruesome crime. Vakasha Sachdev explains

Delhi Commission for Women (DCW) chief Swati Maliwal today welcomed Supreme Court’s verdict in the Nirbhaya case but questioned 6 years of delay in justice. Maliwal will also issue a notice to Delhi Police and Tihar authorities to expedite the execution of convicted rapists in the case.

Executions will not Eradicate Violence Against Women: Amnesty International India

Amnesty International India’s Programmes Director, Asmita Basu, said: “Unfortunately executions do not eradicate violence against women. There is no evidence to show that the death penalty acts as a deterrent for sexual violence or any other crime.”

“Instead, the government must allocate adequate resources for the effective implementation of laws, improve conviction rates and ensure certainty of justice in all cases. Even the Justice Verma Committee, whose recommendations were relied upon to reform laws on sexual assault and rape, had opposed imposing the death penalty in cases of rape.”

Kiran Bedi, Lieutenant Governor of Puducherry, today tweeted that Nirbhaya finally got justice. “It was most gruesome crimes (sic),” she said. Bedi also expressed gratitude for Delhi Police and other officers for doing a “perfect investigation”.

AP Singh, counsel for the convicts, said that the verdict was given due to political, public and media pressure

“Justice should be served to everyone. Injustice has been done to the children (convicts). This decision has come due to political, public and media pressure,” he said.

Rekha Sharma, Chairman of National Commission for Women (NCW), welcomed the decision of the Supreme Court and said that justice can be delayed but not denied.

“I welcome this decision as it proves justice can be delayed but not denied. It’s a landmark decision. This judgment shows that law takes its own course in this country,” said Sharma.

Lawyer for Nirbhaya’s family, Rohan Mahajan, called it a victorious moment and said that faith had been reinstated in the judiciary.

“It is a victorious moment. Faith in the judiciary has been reinstated. We are satisfied today. The only request to the Central govt is to expedite whatever process is to follow now,” said Mahajan.

Nirbhaya’s mother Asha Devi said that their trust in the judiciary had been reaffirmed.

“They were not juveniles. It is unfortunate that they committed such crime. This decision reaffirms our trust in the court that we will definitely get justice,” said Asha Devi.

Badrinath Singh, Nirbhaya’s father, said that it was expected that the petition will be upheld but threats to women in the country are still on the rise.

“We knew that review petition will be dismissed. But what next? So much time has gone by & threat to women have gone up in this span. I believe sooner they’re hanged, better it is,” said Singh.

Asha Devi further said that justice was being served but delayed and it is affecting many other women.

“Our struggle does not end here. Justice is getting delayed. It’s affecting other daughters of the society. I request judiciary to tighten their judicial system, serve justice to Nirbhaya by hanging them as soon as possible & help other girls and women,” said Asha Devi.

The Supreme Court on Monday, 9 July upheld the death sentence awarded to the convicts in the Nirbhaya gang rape and murder case. Three of the four adult convicts had filed a review petition seeking reduction of the death sentence to life imprisonment.

As the Supreme Court is scheduled to announce its verdict on the review plea against the death sentence awarded to three of the four convicts in the Nirbhaya gang rape and murder case, her father, Badrinath Singh, appealed to PM Modi to take more concrete steps in terms of women’s safety in the country.

“Appeal to PM to take concrete steps against atrocities towards women and young girls,” said Singh.

No Reason for Convicts to be Spared: Nirbhaya’s Mother

Nirbhaya’s mother, while speaking to ANI said she was confident the death penalty will be upheld by the Supreme court.

The Supreme Court is likely to pronounce its verdict on the review pleas of three out of the four convicts sentenced to death in the ‘Nirbhaya’ gang rape and murder case on Monday, 9 July.

The fourth death row convict, Akshay Kumar Singh has not filed a review petition against the apex court’s 5 May 2017 judgment.

The apex court, in its 2017 verdict, had upheld the capital punishment awarded to the convicts by the Delhi High Court and the trial court in the case of gang rape and murder of a 23-year-old paramedic student on 16 December 2012 in South Delhi.

‘Nirbhaya’ was brutally gang-raped and murdered inside a running bus in South Delhi by six persons and severely assaulted before being thrown out on the road. She succumbed to her injuries on 29 December 2012 at Mount Elizabeth Hospital in Singapore.

One of the accused in the case, Ram Singh, had allegedly committed suicide in Tihar Jail.

A juvenile, who was among the accused, was convicted by a juvenile justice board. He was released from a reformation home after serving a three-year term.

In its judgment, the Supreme Court had said the “brutal, barbaric and diabolic nature” of the crime could create a “tsunami of shock” to destroy a civilised society.