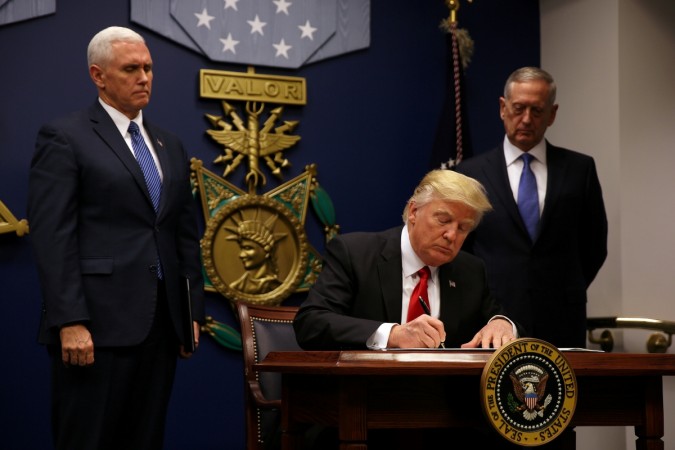 U.S. President Donald Trump signs an executive order he said would impose tighter vetting to prevent foreign terrorists from entering the United States at the Pentagon in Washington, U.S., January 27, 2017

Asian shares were slightly weaker on Friday amid fragile market sentiment after US President Donald Trump called off a key summit with North Korea, though investor concerns were softened by expectations the two countries may still continue dialogue.

On Wall Street, the S&P 500 .SPX ended 0.2 percent lower on Thursday, though it clawed back a large part of its earlier loss of 0.95 percent.

Despite the market’s shift to safe-haven assets, there are no immediate signs of widespread investor panic with the Wall Street’s volatility index .VIX, seen as gauge on investors’ fears, ending at a four-month low on Thursday.

Analysts say that is primarily because investors are becoming accustomed to Trump’s dramatic negotiation style, in which he makes drastic calls before making compromises, and are increasingly seeing his North Korean counterpart, Kim Jong Un, adopt a similar approach.

“I suspect they couldn’t agree on denuclearisation. But looking at comments from the both sides, none of them is ruling out holding a meeting in the future. So I do not expect to see an immediate escalation in military tension,” said Masahiro Ichikawa, senior strategist at Sumitomo Mitsui Asset Management.

Kim Jong un did not smoke cigarette during the inter-Korean summit. [File photo]Reuters

In addition to North Korea, the possibility of US tariffs on foreign auto imports are stoking worries about trade war, although investors also see this threat from Washington as a tactic to get better bilateral deals from major auto exporter nations.

In the currency market, traditional safe havens such as the Swiss franc and the yen were in favour.

The dollar traded at 109.31 yen JPY=, down about two percent from Monday’s four-month high of 111.395 and looks set to post its first weekly loss in nine weeks.

The yen is seen as a safe-haven because of Japan’s status as the world’s largest net creditor nation.

Against the Swiss franc, the dollar extended losses to hit its lowest level since April of 0.9886 franc overnight and last stood at 0.9912.

The franc also stood near 2-1/2-month high against the euro hit earlier this week, trading at 1.1615 franc per euro EURCHF=EBS.

The euro traded at $1.1712 EUR=, slightly above its six-month low of $1.1676 touched on Wednesday, on course to mark its sixth consecutive week of fall.

The currency was dogged by worries about a new coalition government in Italy, to be formed by two anti-establishment parties as well as mounting signs of a slowdown in the currency bloc.

Oil prices slipped, partly on speculation reduced supplies from Venezuela and Iran could prompt Organization of the Petroleum Exporting Countries (OPEC) to wind down output cuts in place since the start of 2017.

OPEC may decide in June to lift output to make up for reduced supply from crisis-hit Venezuela and Iran, which was stung by the U.S. decision to withdraw from the nuclear arms control deal, OPEC and oil industry sources told Reuters.