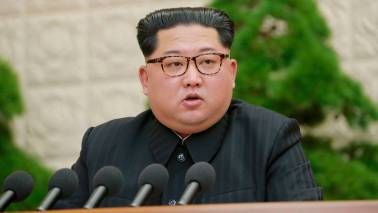 North Korean leader Kim Jong Un told his South Korean counterpart at their historic summit that his country would be willing to give up its nuclear weapons if the US commits to a formal end to the Korean War and a pledge not to attack the North, Seoul officials said today.

North Korean leader Kim Jong Un told his South Korean counterpart at their historic summit that his country would be willing to give up its nuclear weapons if the US commits to a formal end to the Korean War and a pledge not to attack the North, Seoul officials said today. Kim also vowed during his meeting with South Korean President Moon Jae-in on Friday to shut down the North’s nuclear test site in May and disclose the process to experts and journalists from South Korea and the United States, Seoul’s presidential office said.

While there are lingering questions about whether North Korea will ever decide to fully relinquish its nukes as it heads into negotiations with the US, Kim’s comments amount to the North’s most specific acknowledgement yet that “denuclearization” would constitute surrendering its weapons.

US national security adviser John Bolton reacted coolly to word that Kim would abandon his weapons if the United States pledged not to invade.

Asked on CBS’ “Face the Nation” whether the U.S. would make such a promise, Bolton said: “Well, we’ve heard this before. This is – the North Korean propaganda playbook is an infinitely rich resource.” “What we want to see from them is evidence that it’s real and not just rhetoric,” he added.

Seoul officials, who have shuttled between Pyongyang and Washington to broker talks between Kim and President Donald Trump that are expected in May or June, said Kim has expressed genuine interest in dealing away his nuclear weapons.

But there has been skepticism because North Korea for decades has been pushing a concept of “denuclearization” that bears no resemblance to the American definition.

During their summit at a truce village on the border, Moon and Kim promised to work toward the “complete denuclearization” of the Korean Peninsula but made no references to verification or timetables.

Yoon also quoted Kim as saying: “If we maintain frequent meetings and build trust with the United States and receive promises for an end to the war and a non-aggression treaty, then why would we need to live in difficulty by keeping our nuclear weapons?” The Korean Peninsula technically remains in a state of war because the 1950-53 Korean War was halted with an armistice, not a peace treaty.

The closing of the nuclear test site would be a dramatic but likely symbolic event to set up Kim’s summit with Trump. North Korea already announced this month that it has suspended all tests of nuclear devices and intercontinental ballistic missiles and plans to close its nuclear testing ground.

Still, Adam Mount, a senior defense analyst at the Federation of American Scientists, said Kim’s comments were significant because they are his most explicit acknowledgement yet that denuclearization means surrendering his nuclear weapons.

“Questions remain about whether Kim will agree to discuss other nuclear technology, fissile material and missiles. However, they imply a phased process with reciprocal concessions,” Mount said in an email.

“It is not clear that the Trump administration will accept that kind of protracted program.” Analysts reacted with skepticism to Kim’s previously announced plan to close down the test site at Punggye-ri, saying the northernmost tunnel had already become too unstable to use for underground detonations anyway following the country’s sixth and most powerful test blast in September.

In his conversation with Moon, Kim denied that he would be merely clearing out damaged goods, saying the site also has two new tunnels that are larger than previous testing facilities, Yoon said.

Some analysts see Moon’s agreement with Kim at the summit as a disappointment, citing the lack of references to verification and timeframes and also the absence of a definition on what would constitute a “complete” denuclearization of the peninsula.

But Patrick McEachern, a former State Department analyst now with the Washington-based Wilson Center, said it was still meaningful that Moon extracted a commitment from Kim to complete denuclearization, which marked a significant change from Kim’s previous public demand to expand his arsenal of nuclear weapons in number and quality.

North Korea has invited the outside world to witness the dismantling of its nuclear facilities before. In June 2008, international broadcasters were allowed to air the demolition of a cooling tower at the Nyongbyon reactor site, a year after the North reached an agreement with the U.S. and four other nations to disable its nuclear facilities in return for an aid package worth about USD 400 million.

But the deal eventually collapsed after North Korea refused to accept U.S.-proposed verification methods, and the country went on to conduct its second nuclear test detonation in May 2009.

Yoon said Kim also revealed plans to sync its time zone with South Korea’s. The Koreas had used the same time zone for decades before the North created its own “Pyongyang Time” in 2015 by setting the clock 30 minutes behind South Korea and Japan.