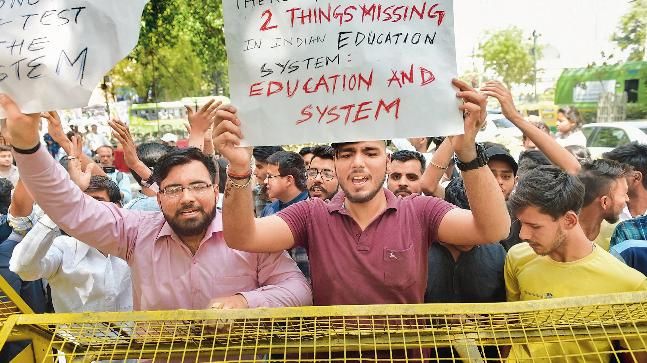 Angry students, parents and even teachers demanded answers as took to streets against CBSE. They felt that the students were being made scapegoats for something that is entirely CBSE’s fault.

Angry parents, children and even teachers facing the brunt of re-exam thrown their way by Central Board of Secondary Education (CBSE) came out on Thursday to demand answers on why the children have been made the scapegoat for not being able to check the leaks.

A senior teacher in Delhi’s government school pointed out that the rot is within the internal system of the CBSE board and has now cost lakhs of children and parents their year-long efforts and time.

Principal of a distinguished school in Noida expressed disappointment in the arrangements made by CBSE officials which were put to rest this year, and now proved as a failure with reports of leaks one after another.

“The CBSE officials claim that their method of conducting exam is foolproof but now they have been proven wrong as the process has been faltered,” the principal told MAIL TODAY. “This clearly established that the otherwise sacrosanct and secured papers of board exam were easily available a day before the exam and accessed by plenty of people on WhatsApp,” the principal added.

Meanwhile, after the CBSE had filed complaints with Delhi Police, the case has been handed over to its crime branch. The CBSE has also instituted an internal inquiry into the matter with a view to secure all future exams. The fresh dates for the two exams are expected to be announced soon. Panic had spread amongst parents who were not only hoping to take off on a vacation with their children after a month long drill of board exams but also aiming to get their children enrolled in universities outside India.

“I want the board to explain which university abroad will admit my child as everyone knows that this season of board examination was marred with reports of leaks. The lack of responsibility on the part of CBSE has jeopardised my child’s chances of making it to reputable colleges,” said a parent.

The students also want the CBSE officials to speed up their investigation on the reports of other question paper leaks by pointing out that the other papers were also leaked on WhatsApp.