Some people prefer to bring a detailed list when they go grocery shopping. Era Golwalkar’s husband Gaurav gets one with diagrams and bullet points.

The couple, who live in Pune, India, takes turns grocery shopping every other week, Era told HuffPost. While she is a “foodie” who “lives to eat,” her husband doesn’t really prioritize food and “eats to live,” she said.

So, she made him an annotated, illustrated grocery list to guide him through the veggie aisle. An image of the list has gotten nearly 5,000 likes on Twitter, with responses from all over the world. 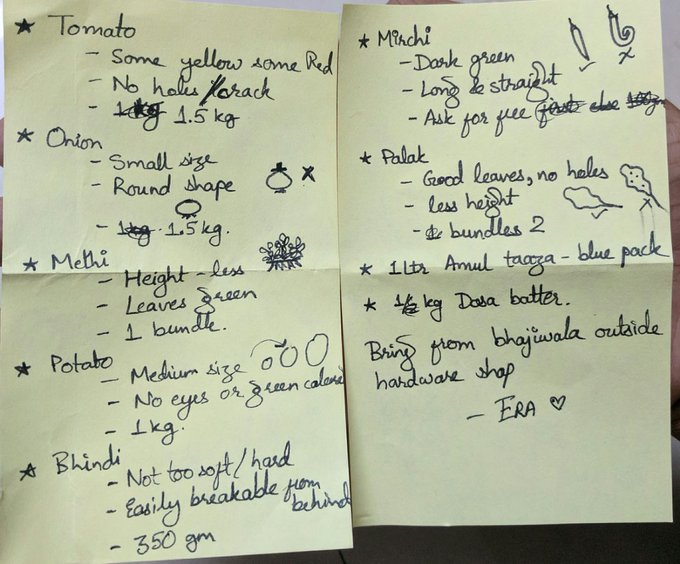 This is the task I gave to my hubby last weekend!! Even U guys shud follow this list for happy customers #bigbasket #grofers#reliancefreshTwitter Ads info and privacy

The list includes parameters for vegetables like onions (“small size, round shape”) and mirchi, which is the Marathi name for a type of chilli pepper (“dark green, long and straight”). Era, an artist, added some doodles as well to specify shape and size.

Era said that while she understands how some people might see the list as condescending, her husband isn’t offended by it. In fact, he posted the image on his LinkedIn page before she shared it on Twitter.

“This is how we have been making our shopping lists for the last four to five months now,” Era told HuffPost. “It has been working well.”

Apparently lots of people struggle with how their partners handle the grocery shopping (or don’t), and should probably take notes.