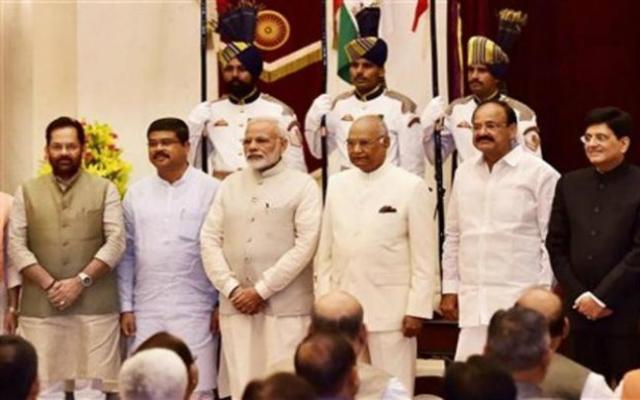 Prime Minister Narendra Modi’s third and major cabinet reshuffle today, which saw the change of portfolios of 32 ministers, has thrown many surprises. The most significant of them all has been the elevation of Nirmala Sitharam from a minister of state with independent charge to not just as a cabinet minister but being allocated the heavyweight defence portfolio.

Nirmala Sitharaman becomes the first Indian woman to hold the defence portfolio as a full-time minister. Before this, though then Prime Minister Indira Gandhi held the portfolio twice – in 1975 and 1980-82 – she was not a full-time defence minister. Out of the 13 ministers who were administered oath by President Ram Nath Kovind as part of today’s cabinet reshuffle today, Nirmala Sitharaman holds the distinction of being the only woman. By virtue of being the new defence minister, she will be a member of the most powerful Cabinet Committee on Security (CCS). In fact, Nirmala Sitharaman made the longest leap, a rare one, today – from that of a minister of state with independent charge of the commerce ministry to a defence minister. BJP’s first time Rajya Sabha MP from Karnataka has been elevated for defending both the government and the party on various issues as a spokesperson.

Among the cabinet ministers from the old team, Nitin Gadkari is the only gainer. Besides his old portfolios of road transport and highways, shipping and water resources, Gadkari also gets river development and Ganga rejuvenation, which were till today held by Uma Bharati. It is believed that Gadkari was being considered for the railway ministry after Suresh Prabhu had offered to resign. There was also a buzz that the railways and road transport ministries could be merged and would be headed by Gadkari. With the transport minister also getting river development and Ganga rejuvenation proves that he enjoys Prime Minister Narendra Modi’s confidence.

Besides Nirmala Sitharaman, three other ministers of state with independent charge to be elevated as cabinet ministers are Dharmendra Pradhan, Piyush Goyal and Mukhtar Abbas Naqvi.

Dharmendra Pradhan has been awarded for the success that the Direct Benefit Transfer of LPG (DBTL) or Pratyaksh Hanstantrit Labh (PAHAL) and Ujjwala schemes of the Petroleum Ministry have achieved. The two schemes played one of the most important roles in changing the lives of the poor, particularly in the rural areas. The PAHAL scheme has been a runaway success. It found an entry in the Guinness Book of World Records for being the largest cash transfer programme in the world. Similarly, Ujjwala scheme gave access to the poor and rural households to smokeless stove, significantly changing the lives of the people, particularly the women. Ujjwala seems to have paid dividends to the Centre electorally. BJP registered historic win in Uttar Pradesh largely due to the Ujjwala scheme.

Piyush Goyal is credited with implementing reforms in the power and coal sectors. He has been instrumental in the record electrification of the rural areas. According to state-run Rural Electrification Corp (REC), as many as 13,685 villages have been electrified till June 20, 2017. Remaining 4,141 villages are to be electrified by 2018. Prime Minister Narendra Modi, in his Independence Day address to the nation on August 15, 2015, had pledged to electrify all 18,452 un-electrified villages within 1,000 days. Thereafter, the REC had taken up village electrification on a mission mode targeting the project completion by May 2018. Over 25.01 crore smart and energy efficient LED bulbs have been distributed under Unnat Jyoti by Affordable LEDs for All (UJALA) scheme and 26.90 lakh LED street lights have been installed in 25 states and Union territories.

Whether it is the party or the government, Mukhtar Abbas Naqvi has always been on the forefront to defend them and launching a counter-attack on the opposition. He is also the government’s most prominent Muslim face. After the exit of Najma Heptulla, there was no Muslim minister in the Modi Cabinet. Naqvi will fill that vacancy. He has also been a competent parliamentary affairs minister with additional charge of minority affairs.

Among the previous ministers of state, Rajyavardhan Singh Rathore and Giriraj Singh are the only gainers. Rathore gets the independent charge of ministry of youth affairs and sports besides retaining information and broadcasting as an MoS. Rathore is perhaps the first sportsperson and Olympic medal winner to become India’s sports minister. Competing in the double trap event as a professional shooter, he won a silver medal in the 2004 Olympic Games. He was awarded the Padma Shri in 2005. He won several medals at the Commonwealth and Asian Games in a sports career spanning about a decade. He served as a commissioned officer in The Grenadiers regiment of the Indian Army before retiring in 2013 as a colonel.

On the other hand, Giriraj Singh, who was MoS in the Micro, Small and Medium Enterprises (MSME) department, gets its independent charge. Kalraj Mishra was the MSME minister till yesterday before resigning from the Modi government. Mishra is likely to be made a governor.

However, among the incumbent ministers, Suresh Prabhu seems to be the biggest loser. He lost his high profile railway ministry in the wake of a series of train accidents in the recent months. He gets commerce and industry ministry instead, which was held earlier by Nirmala Sitharaman as an MoS with independent charge till now.

Uma Bharati has also been a loser in the latest cabinet reshuffle. She lost the water resources, river development and Ganga rejuvenation which she held so far. Instead, she now gets drinking water and sanitation. According to sources, Uma Bharati had to be dropped in the original plan. However, she was retained at the last moment but her portfolios were reshuffled. This could be the reason why Uma Bharati did not attend today’s swearing-in ceremony. Instead, she said she had prior engagements. According to sources close to Uma Bharati, she had requested to be relieved of these ministries on health grounds. In any case, she is one leader in the Modi ministry to watch out for.

With Rajyavardhan Rathore getting independent charge of the youth affairs and sports ministries, Vijay Goel relinquished them. He also gave up the water resources, river development and Ganga rejuvenation ministries as an MoS. He does not hold the independent charge of any ministry. As a result, he will not have the privilege to sit in Cabinet meetings. He now gets parliamentary affairs and statistics and programme implementation as an MoS.

Piyush Goyal replaces Suresh Prabhu as railways minister. Can he keep it on track?