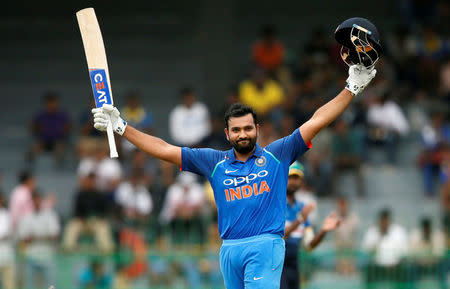 COLOMBO (Reuters) – India bulldozed Sri Lanka by 168 runs in the fourth one-day international on Thursday after skipper Virat Kohli and opener Rohit Sharma smashed blistering hundreds to put the tourists 4-0 up in the five-match series.

The result was Sri Lanka’s biggest ODI defeat on home soil in terms of runs and leaves them unable to claim the two victories they needed in the series to ensure automatic qualification for the 2019 World Cup.

Sri Lanka were also whiteashed 3-0 by India in the preceding test series, prompting the entire selection panel to resign.

With the ODI series already in the bag, India amassed 375-5 after electing to bat and had looked on course for a 400-plus total while Kohli and Sharma were at the crease.

Not that it really mattered as Sri Lanka collapsed to 207 in 42.4 overs in reply, with only Angelo Mathews offering any real resistance with a fighting 70.

Kohli was in sublime form and, having set the tone with a hat-trick of fours against Vishwa Fernando early on, needed only 76 balls to bring up his 29th ODI century.

India were still scoring briskly but Mathews dismissed Hardik Pandya and Sharma off successive balls to put a brake on the scoring rate.

Sharma’s 104 — his second successive ton — came off 88 balls including three sixes and 11 fours.

Manish Pandey compiled 50 not out as he and Mahendra Singh Dhoni put on 101 in an unbroken sixth-wicket partnership, with former captain Dhoni undefeated on 49 in his 300th ODI.

With the home side’s regular ODI captain Upul Tharanga serving a suspension for the team’s slow over rate and stand-in skipper Chamara Kapugedera nursing a back injury, Malinga led a Sri Lanka side that now faces a second successive series whitewash going into Sunday’s final match.