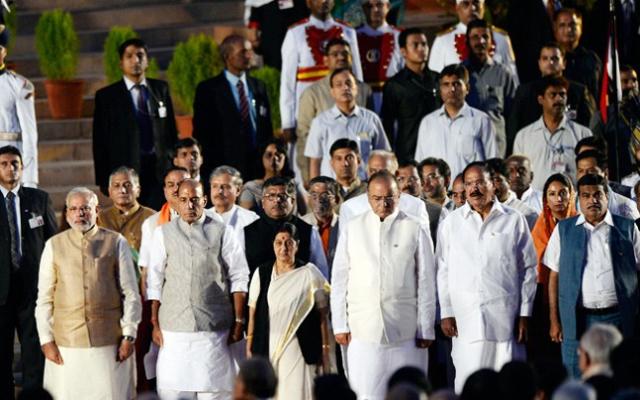 With the inauspicious 15-day period of ‘Pitru Paksha’ starting from September 6 and Prime Minister Narendra Modi leaving for three days to China and Myanmar on September 5, the much-awaited cabinet reshuffle is expected to take place in the evening of Saturday.

The process has already seemingly kicked off with Rajiv Pratap Rudy resigning as the Skill Development Minister. Several others ministers and ministers of state, including senior BJP leader Uma Bharti, too have offered the resignations, indicating that the cabinet reshuffle will happen in the next few days.

Another factor to consider is that President Ram Nath Kovind will visit Andhra Pradesh on September 1 and 2. According to a statement issued by Rashtrapati Bhavan, the President will inaugurate today the new hospital building of the Sri Venkateswara Institute of Medical Sciences (SVIMS) – Sri Padmavathi Medical College for Women. He will also attend a civic reception and public meeting at Sri Venkateswara Arts College Ground, Tirupati.

On Saturday, the President, who has the responsibility of swearing in new minister, will have a darshan of Sri Varaha Swamy Varu, Tirumala, before returning to Delhi. So, the reshuffle is likely to occur as soon as Saturday evening.

The PM and BJP president Amit Shah are learnt to have already carried out the groundwork for the third cabinet reshuffle of the NDA government. They met the ministers to discuss their performance. The two top leaders also had discussions with BJP’s parent organisation RSS, party MPs and chief ministers to apprise themselves of the ministers who need to be dropped and the leaders who could be inducted in the new team.

The second reshuffle took place on July 5, 2016. While Prakash Javadekar was elevated to the cabinet rank, 19 new faces were inducted as ministers of state. In a major change, Javadekar replaced Smriti Irani as the Human Resource Development (HRD) minister. Irani was handed out the Textile ministry.

With the 2019 Lok Sabha elections, the upcoming cabinet reshuffle is being viewed as PM Modi’s last one in this tenure.

The cabinet reshuffle has been necessitated because of five factors – vacancy in key ministries, mid-term appraisal of the performance of the ministers, forthcoming Assembly elections, gubernatorial assignments and realignment of NDA.

Even though the PM would include new ministers, he may still keep some berths vacant. However, filling the existing berths, some of them significant ones, would be Modi’s priority.

At least four senior cabinet ministers are holding additional portfolios. Finance Minister has the additional charge of Defence after Manohar Parrikar shifting to Goa as chief minister. Narendra Singh Tomar, who is already burdened with rural development, panchayati raj, drinking water and sanitation departments, was given the additional charge of urban affairs while Textile Minister Smriti Irani of information and broadcasting after Venkaiah Naidu quit the two crucial ministries to contest the vice-presidential elections.

Besides, Science and Technology and Earth Sciences Minister Harsh Vardhan is also handling the sensitive environment ministry after the death of Anil Dave on May 18.

The cabinet reshuffle is likely to ensure filling up of these vacancies and redistribution of portfolios.

Several train accidents have taken place in the recent months, denting the image of the railway ministry. Railway Minister Suresh Prabhu has offered to resign. However, PM Modi has asked him to wait.

Sources said Prabhu has apprised the PM of the reforms he has undertaken in his ministry as well as the decreasing number of accidents as compared with the previous years during the UPA regime.

Modi may ask him continue in the ministry. However, if at all he decides to shift him, he has two options. Road Transport and Highways Minister Nitin Gadkari may replace him. It is also likely that railways and road transport ministries could be merged and Gadkari may head both of them.

In the third scenario, the railway ministry could go to the Janata Dal (United) [JD(U)]. In this case, RCP Sinha may be considered for the railway berth.

Some ministers may be dropped on the basis of their performance. PM Modi, Amit Shah and RSS leadership have already made the assessment. Some of those who could be dropped are cabinet minister Radha Mohan Singh and Vishnu Deo Sai, Sudarshan Bhagat, Sanjeev Kumar Balyan, Krishna Raj and Vijay Sampla among the ministers of state.

On the other hand, five ministers of state with independent charge are likely to be elevated to cabinet rank. The names of Piyush Goyal, Dharmendra Pradhan, Nirmala Sitharaman, Manoj Sinha and Jitendra Singh are considered for elevation.

The state units of the BJP may also be affected by the reshuffle. For instance, minister of state in HRD Mahendra Nath Pandey, who has been appointed as Uttar Pradesh BJP president, will relinquish his ministerial job.

Baghpat MP Satya Pal Singh, who is a former Mumbai police commissioner, may be brought as a Union minister.

Minister of state for defence Subhash Ramrao Bhamre may be shifted to health. Assam minister Himanta Biswa Sarma is being considered for the defence berth.

The reshuffle is sure to witness the inclusion of JD(U) members as ministers as the party formally joined the NDA on August 19 after breaking away from the mahagathbandhan comprising Lalu Prasad-led RJD and Congress in Bihar.

Bihar Chief Minister Nitish Kumar is learnt to have expressed the desire that JD(U) be given the railway ministry. Nitish had held the portfolio in the Atal Bihari Vajpayee-led NDA government. JD(U) MP RCP Sinha may get the railway ministry if Suresh Prabhu is shifted out of it. Former Bihar chief minister Karpoori Thakur’s son Ram Nath Thakur is also likely to be included in the Modi cabinet.

The AIADMK may also join the NDA and two of its MPs may be made Union ministers. It may get one cabinet and MoS berth each.

Two other NDA allies – Shiv Sena and Telugu Desam Party – may get one more central berths each.

With a number of states going to polls till 2018, the BJP may send some Union ministers to these states. The party may also include some leaders in the Union ministry.

The other state to face elections along with Himachal Pradesh is Gujarat. In view of Hardik Patel-led Patidar-Patel quota stir, the party is considering the inclusion of a couple of MPs of OBC category in the Modi ministry.

Madhya Pradesh, Rajasthan, Chhattisgarh and Karnataka, which go to polls in 2018, will also see increased representation in the Union ministry. MP is likely to get two new faces – one including in place of Anil Dave.

With seven states without a governor, a couple of ministers may be sent on gubernatorial assignment. One of them is Micro, Small and Medium Enterprises Minister Kalraj Mishra. He is likely to be sent to Maharashtra.

PM Modi and Amit Shah are likely to have another round of discussions before finalising the names. Before that, Shah may have a last minute talk with the RSS leaders who are meeting in Vrindavan for three days starting today.

ALSO READ | BJP in huddle ahead of Cabinet reshuffle likely by Saturday: Who gets what